Save our planet from the cybernetic fish armada, Dark Tide, who are spreading their reign of terror into outer space! Pilot a team of four-legged heroes as they fight to free their friends and bring peace to the Solar System.

Each pilot has their own unique gameplay style to fit their fuzzy personality in up to 4-player couch co-op. Hop in a mech and play as Barker the Dog whose ship “Wishbone” recruits buddies for extra firepower, Felicity the Cat and her spread shot ship “Payback,” Lucio the Bear and his helpful shield ship “Mossy Pig II” and Marv the Rabbit in his ship “Lucky 7” with homing bullets.

Overcome overwhelming odds by fusing mech abilities to create a powerful hybrid of their strengths in co-op mode. Be ready for any situation with Barker’s super attack “Bullet Stream”. Tear through enemies with Felicity’s “Cat’s Gaze” that unleashes a barrage of bullets. Come to the aid of injured comrades with Lucio the Bear’s expanding shield “Bear Hug” that protects nearby teammates from incoming bullets. Hop through enemy fire with Marv the Rabbit’s time-slowing super attack “Fearful Focus.”

Test your might against the formidable bosses of each planet. Take on Spike the Narwhal, Vic the Sea Snake, and a whole slew of marine bad guys equipped with challenging attack patterns that increase in difficulty.

Work as a team, but be sure to grab the most plutonium from defeated enemies to see how your high-score ranks against your fellow teammates. 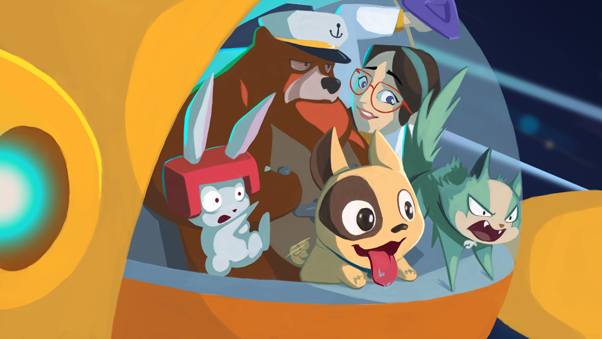 Can you defeat the Dark Tide before their deep-sea forces completely take over the Solar System?! Squad up and fight to take back the Earth in B.ARK!
Minimum: